Feeling eyes on the back of my head...

... and they are going to burn a hole there.

Hmm.... I'm starting to wonder if the old saying is true:
When you feel like you might have done something wrong , you start to feel eyes on you.
{Notice: might; at the time I felt it was perfectly fine}
Eyes pop up from anywhere. And everywhere. Paranoia starts to kick in. You could swear, the two gathering around le ol' watering hole are whispering about you behind those beady little eyes and wicked grins. 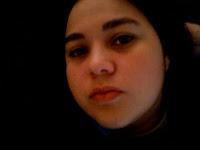 What do you think, bloggers? Tres Cracker-Ass sexy, no?

No, I didn't think so either.

Yep. I look like I just lost a fight ( or maybe you shoulda seen the other guy, mopped the floor wit' em, phew.. lol ), and ice isn't helping.
Those dark circles are back. They look just like this, but only on a different day... This is an old photo, since my crappy phone refuses to transfer my dam files to my lil ol' computer (I say it's possessed.) One day, happily transferring via bluetooth, the dang files practically bumping into each other in the air, they were going so fast. Next day, poop. Na-dah. Just one very frustrated user who may go ape on the freaking technology... !!!!

Yeah, I'm a little lighter now, but no less sleep-depraved.
You wanna know something?? I could not give a dam less about that freaking mockingbird now! They are just officially the most insane birds I have ever encountered. Damn thing about knocked my head off coming home the other day, and I know that I was NO WHERE near its nest.
But, alas, I can't blame it for all my lost sleep.

I guess I should state the reason for the sudden pang of guilt, the feeling that something bad is on the horizon...
That I did something... um, not so nice, and enjoyed it. A lot. So much so, I did it again.
I LOOOVE variety....
Then I found out on Sunday that I needed to catch up on my schoolwork because I slacked just a wee bit. Whilst doing so, (don't worry, I'm not going Shakespeare on ya here)
I realized that I needed to check my email for a few things... And whadda ya know? The one person I was really hoping would not make a big deal about the...um, something I did, wrote me a freaking poem.

Ok, so right about now, you're probably thinking,
"Caro, WTF?? Seriously? This is what's got your panties in a bunch? It's a poem. So What? Some people would kill to have one. WHAT DID YOU DO?? "
... and usually Bloggerdom, I would agree. They can be so harmless and if they are written just right, can be quite sentimental... unless it's from the one person I would least want to receive one from, because that person doesn't really mean all that much to me. Well, truthfully, up until last weekend, this person meant very little to me at all.
Worse, I thought we had an agreement, but no. Worst, has GOT to be seeing this person every day. At least, I hope that's the worst of it.
Oh, man. Can't get away with anything nowadays.
I ask that men don't get attached. I beg. I plead. I moan, I groan.... sorry (grinning) getting off track.
So someone else knows what's going on, well, except that part, and wants all the juicy lil details ( I know the suspense is killing you... but I'm not telling who or what is involved... just bear with me here) and I really wanna dish, but this whole thing is starting to get me down.
*Getting on top of chair*
I mean, geez, people,
*Yelling in the middle of office floor*
CAN'T I JUST HAVE SOME FREAKY FUN ?
YOU GUYS DO IT, AND THAT'S IT?
What's a girl GOTTA DO to make that clear around here?
Put up a damn SIGN?!?!?
HMMM???
*Breathing hard and angrily*
Ok, Bloggerdom. I'm digressing for now. Time to beat some sense into my phone.
Posted by tehkorah at Monday, June 01, 2009

wow, you get poems? All I ever get is "You said you'd love me forever" notes all in those like newspaper letter clipping things? It's very scary.

It figures. You find those notes that were sent scary? You don't want someone to "love you forever"? I knew I shouldn't have... um, hehe, nevermind.
:P